From The Wall Street Journal

The Federal Reserve, in a statement that underscores the deepening severity of developments in credit markets, said it is "providing liquidity to facilitate the orderly functioning of financial markets," and will pump enough money into credit markets to keep the Fed's target for the federal funds interest rate at 5.25%. U.S. federal-funds futures early Friday priced in about a 100% chance that the Federal Reserve will reduce its key lending rate by a half-percentage point to 4.75% by the next policy meeting on Sept. 18.
Posted by Jack McSweeney - REMAX Estate Properties BLOG at 6:49 AM No comments: 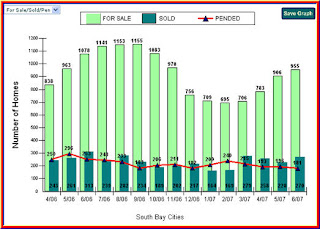 Here is a chart from Trend Graphics. It shows inventory of homes for sale expanding. Sales are also trending higher.

Posted by Jack McSweeney - REMAX Estate Properties BLOG at 7:30 AM No comments:

A new survey by the National Association of Mortgage Brokers (NAMB) says subprime loans continue to account for only a small percentage of loans originated this year, despite their alleged role as the leading factor in the current housing slump.
A recent survey of more than 200 brokers across the country shows that although prime loan activity in April fell to 56 percent compared to 61 percent in March, only 11 percent of the loans originated in April were subprime.
In 2006, only 13 percent of all loans originated were subprime or non-traditional loans created for home buyers with credit scores lower than 620, NAMB says."This data shows that brokers are anticipating and meeting the changing needs of their customers," said NAMB President George Hanzimanolis. "The shift in the market toward more traditional loan products is yet another reason we have cautioned Congress not to overreact to existing concerns and allow the market to adjust."
Posted by Jack McSweeney - REMAX Estate Properties BLOG at 7:58 PM No comments: