How is the South Bay Housing Market? 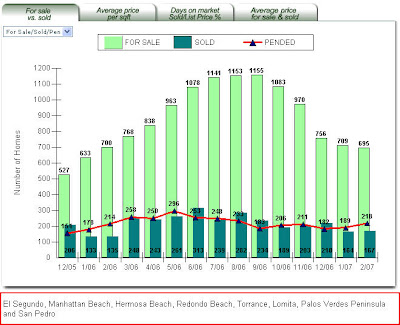 Posted by Jack McSweeney - REMAX Estate Properties BLOG at 10:40 AM No comments:

Stable Rates MAY Turn the Market Around

Mortgage interest rates are expected to remain relatively low throughout 2007, but whether that is enough to spark a full-fledged rebound of the real estate market this year is a subject of vigorous debate.

Low interest rates typically spell good news for home buyers and sellers since they lead to low mortgage payments and allow consumers to buy more house for the buck. But analysts are mixed about whether that stability will trigger increased sales.

Short-term rates are going to stay fairly steady," says Mike Fratantoni, senior economist with the Mortgage Bankers Association. "We also see the 30-year fixed mortgage rate creeping up -- about 6.2 percent today to about 6.5 percent by the end of the year -- and then basically holding steady from there.

The Mortgage Bankers Association isn't alone in its assessment of a fairly stable interest rate environment. In its January 2007 Economic Outlook, Freddie Mac predicted the interest rates for 30-year fixed mortgages will remain below 6.5 percent in 2007. The National Association of Realtors in its February 2007 forecast predicted that the interest rates for 30-year-fixed mortgages will rise to 6.7 percent by the second half of the year. But rates will rise in such a gradual manner that, potential buyers will have some time to weigh purchase decisions," NAR Chief Economist David Lereah said when the report was released.

So what's fueling this interest rate environment? Some say globalization. "Foreign investors are now extremely active in buying U.S. debt securities," Fratantoni says. "That adds another set of buyers to the market and helps keep rates down and fairly stable.

Could the interest rate environment change? "If, for some reason, foreign investors decided to stop investing in U.S. securities, we would see a spike in interest rates," Fratantoni says. "There is a risk there, but I don't think it's a likely outcome."

The rate effect
Nobody denies that low interest rates can spark the market.

"Just look at how a person's monthly payment changes on their home when the interest rate changes by 1 percentage point," says Chris Porter, senior consultant with Irvine, Calif.-based John Burns Real Estate Consulting. "It has a significant impact on their monthly payment." A $300,000 home, for example, would cost a buyer $1,610.46 per month with a 5 percent interest rate and $1,798.65 with a 6 percent interest rate -- nearly a $200-per-month difference. -Posted March 8, 2007 By Tamara E Holmes. Bankrate.com
Posted by Jack McSweeney - REMAX Estate Properties BLOG at 8:13 PM No comments: