"Existing-home sales managed a 0.4% gain during November, the first increase in nine months, but prices tumbled. Home resales rose to a 5.00 million annual rate, up from October's revised 4.98 million annual pace, the National Association of Realtors said. The median price of a previously owned home was $210,200 in November, down 3.3% from $217,300 in November 2006. Inventories of homes fell 3.6% at the end of November to 4.27 million available for sale, which represented a 10.3-month supply at the current sales pace." (WSJ)
Posted by Jack McSweeney - REMAX Estate Properties BLOG at 10:01 AM No comments:

Prior to this action, forgiven mortgage debt due to foreclosure, short sale, or deed in lieu of foreclosure, was considered taxable income. The new law, however, temporarily waives these taxes for debts forgiven (as high as 35%) from the beginning of 2007 to the end of 2009. The bill also extends the tax deduction for mortgage insurance premiums through 2014.

"This is going to make a happy holiday for many homeowners," President Bush said yesterday before signing the bill in to law. During the press conference he added the following:
"When you're worried about making your payments, higher taxes are the last thing you need to worry about. So this bill will create a three-year window for homeowners to refinance their mortgage and pay no taxes on any debt forgiveness that they receive. And it's a really good piece of legislation.
The provision will increase the incentive for borrowers and lenders to work together to refinance loans – and it will allow American families to secure lower mortgage payments without facing higher taxes."

The Fed.. Here we go again!

Most people you ask have no idea what the Federal reserve does. Sure, we know they meet once a month or so and raise or lower interest rates but couldn't we just let the market determine that? Why so much big government, always looking out for us, suposedly?
Now they want to impose rules on lenders to safeguard us some more. They are proposing: 1) Barring or restricting lenders from penalizing subprime borrowers — those with tarnished credit or low incomes — who pay their loans off early. 2) Forcing lenders to make sure borrowers set aside money to pay for taxes and insurance. 3) Barring or limiting loans that do not require proof of borrower's income. 4) Setting new standards for how lenders determine a borrower's ability to repay a home loan. All of this seems like common sense to me.
I am a firm believer in the free market. I don't think the Fed making new rules solves anything. I think borrowers have to make their own decisions and Lenders have to qualify people for loans they can afford. Easy credit is a good thing for qualified borrowers, and a bad thing for the non-qualified.
What do you think?
Posted by Jack McSweeney - REMAX Estate Properties BLOG at 6:14 AM No comments:

The Federal Reserve lowered the Fed funds rate (what banks charge each other) by .25 today. That will bring it down to 4.25%. In response, many of the major banks dropped the prime rate to 7.25% which will make homeowners who have HELOC (Home Equity Loans) a little happier.
The Discount rate (what the Fed charges banks for loans) was also lowered, this time by .25% to 4.75%.
It is my opinion that the Fed will have to continue to lower rates for the forseeable future in order to keep our economy moving. Our dollar should start to get stronger in the second quarter of 2008.
Posted by Jack McSweeney - REMAX Estate Properties BLOG at 1:50 PM No comments: 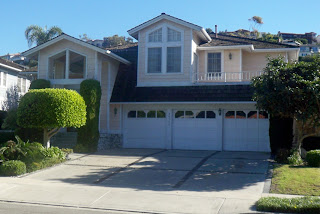 Welcome to your new home! This home is in the process of being painted inside and out and will be ready for showing soon. It is located at 30170 Avenida Esplendida, Rancho Palos Verdes, CA. 90275 and is on a 12,388 square foot lot with a pool. The house itself has 4 bedrooms, 3.5 baths, Formal Living room, Family room, private master suite and is walking distance to los Verdes Country Club.
The home is about 3300 square feet and has a 3 car garage. It is priced to sell at $1,429,000. It is also in the Palos Verdes School district. Hurry.
Posted by Jack McSweeney - REMAX Estate Properties BLOG at 1:39 PM No comments:

This is a fantastic listing for someone to get into a "Queens Necklace" oceac and city view property in the Hollywood Riviera Section of Torrance.