My Latest listing sold in 8 days! 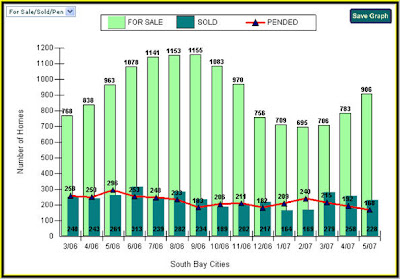 The median price of an existing single-family home in California increased 4.8 percent in May and sales decreased 25 percent compared with the same period a year ago, C.A.R. reported this week. "The decline in sales continues to be driven by both tighter underwriting standards since the start of the year and the adverse psychological impact of news regarding foreclosures and the subprime situation," said C.A.R. Vice President and Chief Economist Leslie Appleton-Young. "In particular, the lower end of the market â€" which is the part of the market that is most affected by the subprime situation â€" has seen greater declines in sales and weaker prices than the higher end of the market. This will likely be a recurring theme in the coming months."

According to the report, the median price of an existing, single-family detached home in California during May was $591,180, a 4.8 percent increase over the revised $563,860 median for May 2006. Also last month, closed escrow sales of existing, single-family detached homes in California totaled 366,370 at a seasonally adjusted annualized rate, down 25 percent compared with the sales pace recorded one year earlier and down 1.9 percent from home resale activity in April 2007.
Posted by Jack McSweeney - REMAX Estate Properties BLOG at 10:01 PM No comments: